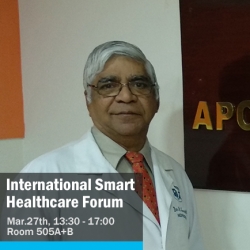 K. GANAPATHY M.Ch. (Neurosurgery), FACS, FICS, FAMS Ph.D. is a Past President of the Telemedicine Society of India. former Secretary and Past President of the Neurological Society of India, former Secretary of the Asian Australasian Society of Neurological Surgery , Past President of the Indian Society of Stereotactic & Functional Neurosurgery. Formerly Adjunct Professor, at the IIT Madras, & Anna University he is currently Emeritus Professor at the Dr MGR. Tamilnadu Medical University, Chennai. Dr. Ganapathy was formerly Honorary Consultant and Advisor in Neurosurgery Armed Forces Medical Services. In 1990, he became the first in South Asia to get a Ph.D. in neuro-imaging. A former examiner & Inspector for the National Board of Examinations Ministry of Health, Govt. of India he was also an overseas examiner to the Universiti Sains Malaysia and the Royal College of Surgeons Edinburgh. He is Member of the Editorial Board of 4 International and 3 National Journals in Neurosciences and was the first neurosurgeon from South Asia to be formally trained in Stereotactic radiosurgery in 1995 and later in robotic radiosurgery in 2008. He is a reviewer for ATA’s official journal and other telemedicine journals. A pioneer in introducing Telemedicine in India Dr. Ganapathy has been working relentlessly from 1999, for the growth and development of Telemedicine in India. He was a Member of the National Task Force on Telemedicine. He started the first formal Certificate course on Telehealth Technology, in conjunction with the Anna University. He was a mentor for MBA scholars from Harvard Business School and for the Ross Business School University of Michigan, the Yale University and from several globally renowned Indian universities During the last 42 years he has presented more than 430 papers in national conferences and 170 in International meetings. He has published about 210 scientific papers & 16 chapters in books, besides about 70 articles in “The Hindu” a widely read English newspaper. He is President of the Apollo Telemedicine Networking Foundation, the largest and oldest multi-specialty Telemedicine network in South Asia and Director, Apollo Telehealth Services. In Nov 2007, he organized a well-attended international conference on telemedicine at Chennai. He has been on the faculty for several World Federation of Neurosurgical Societies Educational Programmes. A former member of the Programme Advisory Committee (Health Sciences) Dept. of Science & Technology Govt. of India he is currently a member of BIRAC (Biotechnology Industry Research Assistance Council) reviewing research projects for funding. As chairman of the scientific committee, he has played a key role in organizing eight annual international conferences on “Transforming Healthcare with ICT’. He has overseen setting up telemedicine units at 14,000 ft. height in the Himalayas for the Himachal Pradesh Government. Columbia University had selected ATNF as a case study to demonstrate global best practices. Full CV available at http://www.kganapathy.com.