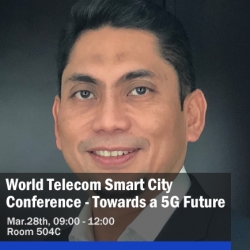 An experienced technologist, Azrin’s current focus is to
propel TM towards beyond a traditional TelCo, through User
Design Thinking, SDN–NFV, IOT, smart cities, LoRa and other
innovative ways for technology to improve our everyday
lives.
Has been with TM since 1997 in various capacities, including
16 years in research & development focusing on ICT
industry. Published numerous papers from 1996 to 2018.
Successfully commercialized research outcomes that
contributed more than RM10M to TMR&D revenue.
Within the telecommunication, ICT and IOT industry, Azrin is
also widely recognized as a subject matter expert. He is a
member of the LoraWan Alliance as a contributor in the
Strategy & Technical Group. He works closely with MDEC
and MCMC for TM’s LoRa IOT LPWA initiative. Won several
awards in ITEX & APICTA. Also involved with SIRIM and
MTFSB to draft some portions of the Malaysian
Telecommunication Standards. He has also successfully filed
4 PCT patents and several local patents with 1 already
granted from USPTO and a couple more in filing stage.
All these are testament to his technical prowess, both in
conventional as well as avant garde ICT and
telecommunication technologies. Capitalizing on this, TM in
2014 appointed Azrin as the CTO of VADS Lyfe Sdn Bhd that
focused on smart cities and smart services. That 3 year stint
prepped him for his subsequent role, which is to head the
team entrusted to develop and manage TM’s smart services
products.
Azrin currently heads the Product Division of TM ONE, to
develop telecommunication, ICT and IOT products for TM’s
Government and Medium / Large Enterprise customers.
Azrin has an M.Sc. in Business Leadership from University
of Northumbria at Newcastle, an M.Sc. in Electrical &
Electronics (Computer Engineering) from Universiti Sains
Malaysia and a B.Eng in Electrical & Electronics
(Telecommunications) from Universiti Sains Malaysia.