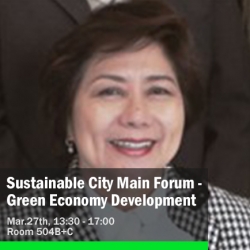 Mary Jane Ortega served as CityNet’s Secretary-General (2009-2013) and a mayor of San Fernando City, La Union (1998-2007). She was also one of three Vice Presidents of ICLEI – Local Governments for Sustainability. She is the first Filipina to receive the United Nations Scroll of Honour Award from United Nations Habitat in 2000 for her advocacy for the empowerment of women and for the City Development Strategies. She is currently a member of Board of Trustees of Clean Air Asia, a member of the Advisory Board of the Global Initiatives on Trans National Crime, and Special Advisor to the City of Yokohama’s Y-Port Project. In the Philippines, she continues to be a part-time lecturer at the Ateneo School of Government, Acting Chairman of the Institute of Solidarity in Asia, Mentor for Synergeia Foundation, board member of St. Louis College and Coordinator/Liaison for the La Union Marine Center. Mary Jane generously shares her time by representing CityNet in high-level conferences, contributing to the network’s strategic long-term agenda, and promoting CityNet in the Asia Pacific region.

More in this category: « Nuttawit Surittikul, Executive Vice President, CAT (The Communications Authority of Thailand) Kevin Hsu, Assistant Director of Centre for Liveable Cities, The US »
back to top
Joomla3 Appliance - Powered by TurnKey Linux