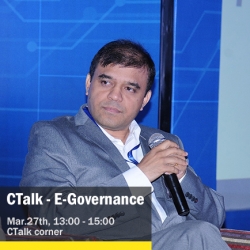 As Chief Architect at The Open Group, and President, Association of Enterprise Architects (India), Dr. Saha has been identified as a Thought Leader by IBM Smart City Connect, and featured by Forbes. He is an advisor to the Ministry of Electronics & IT (MeitY), Government of India, a key member in the National Committee for Enterprise Architecture, a co-author of the India Enterprise Architecture (IndEA) Framework, and has played a critical role in making it into a national standard. He is an invited faculty to MeitY’s e-Governance Leadership Programme for senior strategy level bureaucrats. He advises the National eGovernment Division of the Digital India Corporation on matters pertaining to enterprise architecture, and currently is a member of the high level committee involved in the development of National Digital Health Platform for the Ministry of Health and Family Welfare, Government of India. Previously, as Head of Wipro’s Government and Public Sector Architecture Practice, he was instrumental in creating a government focussed architecture domain, and selected as an elite Distinguished Member of Technical Staff in Wipro. He also leads The Open Group’s Government Enterprise Architecture Working Group. Dr. Saha has published five books on enterprise architecture. His work has been translated into Arabic, Mandarin, Korean, Russian and Polish. He has delivered over hundred keynote sessions at prominent forums, seminars and conferences worldwide. Dr. Saha has been the Chief Architect to Andhra Pradesh State Enterprise Architecture (ePragati) taking it to international prominence. He is a two-time recipient of the Microsoft research grant supported by the UN, and a joint recipient of the Innovation Fund by the Land Transport Authority of Singapore. He has advised numerous public sector institutions and delivered numerous executive programs internationally. He has been invited as a distinguished speaker to the World Bank, Carnegie Mellon Univ, UN Univ, National Conference of eGovernance of the Gov’t of India, Microsoft, SAP Labs, Gov’t of India, Indian Railways, Denmark IT Society, Korea Institute for IT Architecture, IEEE, Nanyang Business School, George Mason Univ, IIM Bangalore, XLRI, IIM Kozhikode, Economic Times, Taipei City Council, NIC, Gov’t of Kerala, Indian Railways, and several countries. His work has been cited by the UN, ITU, WHO, US Department of Defense, Open Technology Foundation, Info-Tech Research Group, Carlsberg and the Open Group and has contributed to the World Bank EA Guidelines for Mongolia, Vietnam & Bangladesh. He has been an examiner for research degree to the UNSW, a visiting researcher to the UN University, an expert reviewer to the ACM EA Tech Pack and an invited guest faculty at the Carnegie Mellon University. In recognition of his expertise and contribution, Dr. Saha has been a jury member for the State Government E-Government Awards 2018. Dr. Saha holds a Ph.D. in Information Systems from the prestigious Indian Institute of Science, Bangalore and has received the best research design and best thesis awards. He is DODAF certified. He is an alumnus of the MIT Sloan Executive Program and Wipro Business Leaders’ Program.