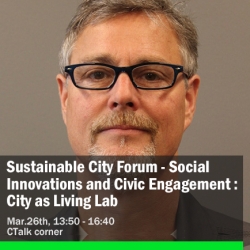 With degrees in Art and Philosophy from Penn State University, Paul is a former Hollywood Art Director, Multimedia Artist and an early pioneer in web interactivity and computer aided design. Shifting his focus entirely to web and mobile at the turn of the millennium, he co-founded Glimworm IT BV in Amsterdam bringing unique insight into the creative process of software, web and app development and design. He has, along with his team at Glimworm, won several industry awards including the Gold Prize for Apps4nl, 2012 with Vistory- The interactive historical video app- for which he also received an E-Culture Best Practice Award and a World Summit Award nomination. In 2014 he co-founded Glimworm Beacons and focused more on interactive opportunities IoT enabling hardware has to offer to Digital Cultural Heritage working closely with ground breaking institutions on ibeacon enabled interactive experiences. In early 2015, together Jonathan Carther and the City of Amsterdam, co-created the Amsterdam IoT Living Lab as a project to engage citizens with new interactive technologies which won a prestigious ODiNE grant and lead to the IoT Olympics with the Amsterdam University of Applied Sciences in 2016. Most recently, he is working on a book about Sensitive Cities - "Shifting Power back to People" and creating a new international program with the Amsterdam CTO office - The City Innovation Exchange Lab. The CITIXL launched January 2018 with the mission to lead quick win collaborations with the City of Amsterdam and partners by leveraging the power of the crowd in Living Labs.