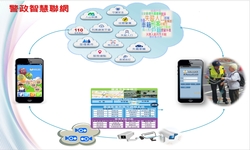 The ecosystem of city infrastructure, city plan and management, public satisfactions constructs the Smart-City, and the Police Administration is the core of that ecosystem.

The Project of 「The Police Cloud Computing Plan」, which is executed by the National Police Agency (NPA) from 2012 until 2016, builds the basic platform of the Police Cloud Computing and the Police Mobile Computer System. The core technology of that system is to well integrate the 31 database sources, which include people, vehicles, criminal cases, objects, time, places, photos and videos information from six nationwide organizations, to help the efficiency of criminal investigation through this intelligent, mobile and cloud ICT technologies.

That system provides 17 police applications; those include M-Police Integrated Query System, Real Time Audio and video Transmission System, Instant Photo Comparison System, Instant License Plate Recognition System, Citizen Interview System, Police Instant Message System, Police Regulations Query, Police Common Operational Procedures (SOP) Inquiry, etc. In addition to those applications, the system can integrate the Cloud Police Mission Dispatch System, the Suspicious Vehicle Track Inquiry System and the Police Service App, to maintain the public order, to help the dementia and missing people back home, and to detect the suspicious and stolen vehicles. We have improve the clearance rate of stolen vehicles to 72%, the fugitives clearance rate to 77%, significantly improve the efficiency of police service and public safety satisfaction, which is 73.7%, the highest score we have ever had.

We use the commercial smartphone as the police equipment that decrease the heavy weight and make the design of the application easily. That system was selected as the best practice of the mobile application by the Executive Yuan. That system was widely reported by the newspaper, TV News and electronic network media.

In addition, the representatives of the Republic of Panama show a great interest in our system after visiting NPA. Our system was introduced exclusively at the Tenth International Police Practice Seminar, and the conference held by the British Interior Ministry, which significantly raised our international prestige.

1. 14,430 M-Police Mobile Computer Systems have been allocated to the police forces of the 22 counties. The ratio of police officer to equipment is 4:1; the total inquiry number is roughly 790,000,000 so far.

A. We use the commercial smartphone as the police equipment that decreases the weight and makes the design of the application easily.

B. We have improved the clearance rate of stolen vehicle to 72%, the fugitives clearance rate to 77%, significantly improve the efficiency of police service and public safety satisfaction, which is 73.7%, the highest score we have ever had.

3. It only takes 30 seconds to identify the missing persons, help the elderly with dementia back home quickly.

4. The system is selected as the best mobile application project by the Executive Yuan in October 18, 2016.

5. This system has received a great attention with high media coverage in Taiwan, which greatly promote a positive image of police.

6. This system has drawn global attention and raise our international prestige.

A. The representatives of the Republic of Panama show a great interest in our system after visiting NPA.

B. Our system was introduced exclusively at the Tenth International Police

7. The system allowed the Ministry of Communications to revise traffic regulation regarding the penalty for driving without a license, which show a convenient and flexible measure to our citizens.

8. The polls show that public satisfaction toward law enforcement has hit a record high once and again.