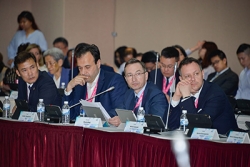 The Smart City Mayors’ Summit has always been the highlight of the Smart City Summit & Expo (SCSE) every year. Starting from 2015, mayors from around the world are invited to the annual Summit to share their experience in smart cities. In the first year, three mayors from overseas were invited to exchange views with the Taiwanese mayors and also opened the door for the smart city exhibitions in Taiwan to go global. In 2016, five mayors from foreign cities participated in the summit, and international participation drastically blew up since then. In 2017, there were 54 mayors from overseas, 120 in 2018, and over international 150 mayors are expected to participate this year. It is apparent that the Summit held in Taipei is already the largest in the world as an exchange platform for the smart city knowhow.

The Taipei City Government is one of the organizer of the Smart City Summit & Expo and is also responsible for planning and hosting the Mayors’ Summit. Each visiting mayor can not only exchange views with the Taiwanese mayors, but also exchange ideas with all participants with a variety of solutions showcased at the exhibition, including smart healthcare, smart transportation, smart buildings, smart education, smart security, and smart energy. These are affordable and economically feasible solutions currently deployed throughout cities in Taiwan.

The theme of the 2019 Smart City Mayors’ Summit is “Smart City Innovation and Realization”. The mayors are expected to benefit greatly from the discussion on the topics of “Power Up for Cities: Sustainable Cities that Connects with Industries” and “Smart City & Innovative Entrepreneurship”. However, this Summit is not open to the public and limited to current mayors in office due to the limited capacity of the venue.

The Taipei City Government teamed up with the municipal governments of New Taipei City, Taoyuan City, Taichung City, Tainan City, and Kaohsiung City last year to launch the “Global Smart City Alliance”, which is scheduled to have a full-day inauguration event on March 27th. In addition to sharing their experience, the various innovative application concepts between alliance cities are critical to building a proposal that allows all creative ideas to be tested in different cities, subsequently quickly promoting the development and adoption of smart cities around the world. Mayors from around the world are welcome to participate in this event.