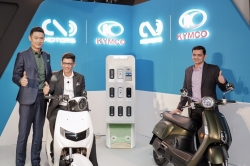 KYMCO (Kwang Yang Motor Co., Ltd.), a global locomotive manufacturer, announced in mid-September that it will cooperate with Indian startup 22Motors. Ionex charge point network system will be fully adopted to Flow Scootor of 22Motors, and the “Ionex Business Edition” will be released in Taiwan on 12th October. Ionex will combine 4 innovative technologies and 4 packages for the application and promotion of commercial EV.

These funds are expected to be used to build assembly plants and energy exchange stations, and produce Ionex batteries in India.

KYMCO claimed that in addition to its partners in the Indian market, an expansion into China’s market will be started. So far, Fresh Hema, a large-scale retailer of Alibaba Group, Qeebike, featuring vehicle-sharing technology, and Xhang Fei Chong Dian, a provider of energy service have all become KYMCO’s clients. Changzhou City, Ningde City, Quzhou City, and Shenzhen City will also build their smart city projects based on Ionex charge point network.

Ko Sheng-Feng, chairman of KYMCO, said that KYMCO has long been concerned and closely connected to the needs of users and is fully committed to the future development of electric vehicles. In addition to consumers, it also made complete plans for commercial operators and government units by launching the Ionex Business Edition, which is expected to stand out from competitors and drive EV industry development worldwide.