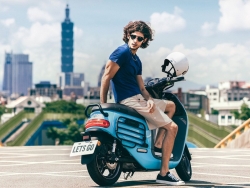 Gogoro to Collaborate with YAMAHA, Aeon, and PGO on Developing Electric Motorbikes

Since the announcement of its collaboration with Japanese company YAMAHA in September, Gogoro has then announced on the 17th of October to also ally with Aeon and PGO in developing electric motorbikes, gradually extend the influence of Taiwan’s automobile industry to global stage.

According to the agreement between Gogoro and YAMAHA, the two parties will put joint efforts in the R&D of new electric motorbikes. The new product will adopt Gogoro’s system and battery, and is expected to be launched and distributed by YAMAHA in the summer of 2019 in Taiwan.

Aeon and PGO will also be developing, producing and selling the electric vehicles on the base of Gogoro's electronic control system, smart battery, and battery exchange system. Aeon expects to launch the first model in the summer of 2019, and so will PGO in the second half of the same year.

YAMAHA entered Taiwan market in 1966, and currently is developing and manufacturing various types of motorbikes under the brand name YAMAHA Motor Taiwan Co., Ltd. It has sold a total of 290,000 units in 2017. At the same time, YAMAHA Taiwan also manufactures and sells electric scooters E-VINO back to Japan. In addition, the YAMAHA Motor R&D Taiwan was built for the R&D of scooter locomotives in the local market.

Gogoro Founder and CEO, Xuesen Lu, said, “How to allocate and utilize energy in a smarter way is one of the biggest challenges we face today. We are very pleased that Aeon and PGO, together with YAMAHA, have decided to adopt Gogoro's smart energy network to produce electric vehicles that change how energy is used in creating smart cities.”