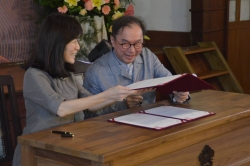 According to the latest Taiwan demographic research, 14.05% of the population is over 65 years old, which means one-seventh of the population is elder. National Cheng Kung University (NCKU) signed MOU (Memorandum of Understanding) with Quanta on 3rd September for mutual cooperation on building geriatric hospital in NCKU Hospital with Quanta’s AI (Artificial Intelligence) and IoT (Internet of Things) technology, which is expected to be launched in 2022.

According to Huey-Jen Jenny Su, President of NCKU, ICT (Information and Communication Technology), Big Data, AI and IoT technology will be implemented in NCKU Hospital. NCKU Hospital is expected to be the center of smart long-term care in south Taiwan. NCKU Hospital introduces new applications because the traditional medical treatment lacks the real-time information streaming among different specialized departments, which is often required for geriatric disease, and even increases doctors’ workload, eventually extending the stay in hospital for elder patients.

‘AI revolution goes faster than expectation. We stay positive toward this situation.’ indicated by Barry Lam, President of Quanta. He also mentioned that he wants to grab the opportunity of cooperation as he knows the scarcity of geriatric hospitals worldwide. Therefore, with AI and IoT technology for smart elder care, NCKU Hospital has the chance to become a global model.

Barry Lam said that smart hospital cannot work without precision medicine with AI. However, he also receives concerns about employees being replaced by AI. He thinks that the most irreplaceable job is doctor. For instance, people used to type with typewriters but now with computers. The change of device will help us with more things than replacing people.

NCKU pointed out that after signing MOU with Quanta, clinical experimental sites and medical research assistance will be provided by NCKU Hospital in order to optimize Quanta’s service and products.