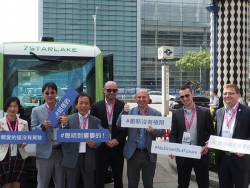 Taipei City Government is building itself a smart city by opening the test field and public-private-partnership, which earned the recognition from citizens and industries. For instance, as traffic is the most irritating problem in smart city development, Taipei City actively promotes the green sharing vehicle system, motivating people to share instead of to own, discouraging people from owning private vehicles, and cutting down the demands of parking space while providing more public space for the citizens.

In addition, in order to increase the use of green vehicles, Taipei City Department of Transportation also provides the “Free Parking” for electric scooter drivers in the hope to achieving the goals of reducing emissions from motorcycles, promoting sharing economy, green energy and digitalization. This year on March 13, Taipei City officially announced the nation’s first “Autonomous Car Test Field in Beitou-Shilin Technology Park”, which provides the IoV (Internet of Vehicle) applications, autonomous driving, and intelligent infrastructure.