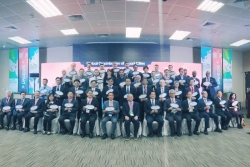 Taipei City Government announced the pre-launch of the Global Organization of Smart Cities (GO SMART), of which the ceremony was held on March 28th, the second day of the Smart City Summit & Expo 2018. Under the witness of CHANG Jing-sen, the Minister without Portfolio of Executive Yuan, the ceremony involves Charles Lin, Deputy Mayor of the founding city, namely Taipei, 6 city representatives from Taiwan, industry representatives, and overseas city leaders from Europe, Asia, the US, and Oceania. The Organization is expected to be officially launched next year at the Smart City Summit & Expo 2019, after a year in preparation.
The ceremony was conducted at Nangang Exhibition Hall, Taipei, with the signatures as support from Taipei, New Taipei, Taichung, Tainan, Kaohsiung, Taoyuan, and industry giants including Advantech, Liteon, Acer, Tatung, FarEastone, Asus, Pegatron, Asia Pacific Telecom, Chunghwa Telecom, Transcend, III, and ITRI. The signatories also include over 18 overseas city leaders across continents, such as Argentina, South Korea, New Zealand, the UK, Greece, France, and Czech Republic.

According to Deputy Mayor Charles Lin, Department of Information Technology of Taipei City Government established the Taipei Project Management Office (TPMO) in 2016, with a view to discovering the local innovations city via the public-private-partnership. The office has initiated over 130 cases of POC (Proof of Concept) smart city applications, and thus developed the GO SMART initiative in order to share such experience and solutions with international cities.

Charles Lin added that the pre-launch of GO SMART is significant; with the coming year in preparation to be expected, Taipei City Government will stipulate the articles of organization, bringing the Organization into operation. Conferences or activities will be held to involve everyone to participate in the discussion. It is expected that in next March at the Smart City Summit & Expo 2018, Taipei City Government will announce the official launch of GO SMART.

All attending city representatives expressed their will to share experience in smart city, open local sites for Inter-City POC projects, and activate cross-city collaboration, in the hope of solving cities’ problems practically and accelerating urban development.

Deputy Mayor of Taipei City, Charles Lin and 6 city representatives from Taiwan, industry representatives, and overseas city leaders from Europe, Asia, the US, and Oceania.