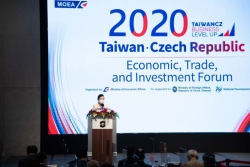 Czech Senate President Milos Vystrcil led a 89-member delegation to Taiwan and attended the "2020 Taiwan-Czech Republic Economic, Trade, and Investment Forum" on August 31st. MOEA Minister Wang, Mei-Hua stated that the three MoUs signed with Czech in the three areas of Smart City & AIoT, innovative entrepreneurship, and smart machinery will continue to cement the relationship between Taiwan and Czech Republic in the future. In addition, Taiwan Cooperative Bank and the Export-Import Bank of the Republic of China are both evaluating the feasibility of setting up branch offices in Czech.

Minister Wang noted in her remarks that the Czech delegation is the first oversea delegation in this large scale to visit Taiwan since the outbreak of COVID-19. The bilateral economic and trade development has been accelerated over the years. For example, the level of Taiwan-Czech Bilateral Economic Consultations has risen to involve deputy-minister-level leading officials since 2016. Minister Wang has led a delegation herself to Czech in 2018 for the meeting. Many collaboration and networking programs between the two nations have been taken place in areas of economic investment, startup communities and circular economy.

According to the Department of Investment Services of MOEA, as the bilateral economic and trade relations between Taiwan and the Czech Republic has been deepened in recent years, yet no Taiwanese Banks has established branches in Czech, Ministry of Finance has taken into consideration of establishing branch offices of financial institutions in Czech so as to strengthen bilateral relations and provide Taiwanese businesses with financial services. Taiwan Cooperative Bank and the Export-Import Bank of the Republic of China are now conducting an evaluation to set up their branches in Czech with the aim of marching into the Central and Eastern European market by Taiwan's banks in Europe.

To continue encouraging tourist exchange between both sides, the Tourism Bureau of the Ministry of Transport and Communication has invited the Czech Republic to participate in Taiwan's largest travel exhibition "2020 Taipei International Travel Fair" and has expressed its willingness to reconsider to attend tourism fair in Prague along with Taiwan's MOFA, so as to accelerate the recovery pace of tourism industries after the pandemic.