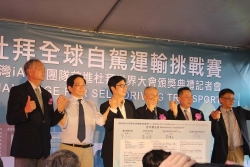 The team of iAuto consists of members from Department of Mechanical Engineering of National Taiwan University (NTU), Ming Chi University of Technology (MCUT), iAuto Technology, Formosa Plastics Transport Corporation, and Industrial Technology Research Institute. According to Kang Li, Associate Professor of Department of Mechanical Engineering of NTU, they received the invitation from Dubai last summer. Among 27 teams from the globe, iAuto is the only team from East Asian country to be nominated for the top 3. The final result will be announced in Dubai on 15th October. The winner of championship will not only receive one million USD as prize, but also gain an opportunity to receive investment from Dubai startup fund. The technology of this Taiwan team has already overcome the complicated transportation scenarios of Dubai World Challenge for Self-Driving Transport in June, including hillside, open roads, intersections with traffic light, heavy fog, and mix-fleet traffic.

Sheng-Kuang Chen, the chairman of Formosa Plastics Transport Corporation, indicated that the technology of autonomous vehicles can be used in the transport in No. 6 Naphtha Cracker Complex of Formosa Petrochemical Corporation. The transportation system, which can be controlled by computer without labor, will be an unprecedented achievement under the collaboration across industry, government, and academia. The principal of MCUT, Thu-Hua Liu, said that the combination of technology and knowledge will produce the R&D synergy under the target-oriented cooperation of Taiwan teams. The principal of NTU, Chung-Ming Kuan, mentioned that the development of autonomous vehicle will be the new trend, and he expects that the further cooperation among industry, academia, and research institutes will contribute more for Taiwan.