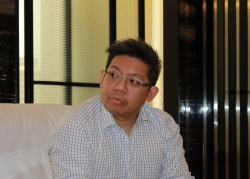 TAIPEI (Taiwan News) — Since the Taiwan Smart City Solutions Alliance (TSSA) started organizing the Smart City Summit & Expo in Taipei, in 2014, the annual exposition has become one of the most popular events of its kind in the region.

In 2018, 128 city leaders from 45 countries took part in the four-day exposition, while more than 1,000 exhibitors showcased their latest products and services.

Taiwan News (TN): SECOM has in recent years focused on extending its business to other fields. It that the reason why you decided to serve as TSSA’s president starting from this year?

Frank Lin (LIN): SECOM has worked with local governments or government agencies for a decade. We provide security systems or surveillance in science parks and parking spaces, or assist the National Police Agency in locating stolen cars.

Over the past three years, we have participated in a number of overseas expositions to gain a better understanding of the latest developments in smart city technology and applications. We have also completed field research around the world to see how smart city projects are done in various cities.

SECOM has focused on security, which is at the core of building a smart city, and our company is the most experienced and respected in the industry, in Taiwan. I thought we can help Taiwan’s cities to build their smart city idea from this aspect and, perhaps, provide technical assistance. That is why I decided to take up the post as TSSA president.

TN: What would you like to achieve during your one-year mandate? What do you want to promote through TSSA?

LIN: Gaining more exposure for the Smart City Summit & Expo in the international community is our priority. We will also hold forums and other activities for representatives of industries and cities around the globe to exchange and share their technologies and experiences.

In the meantime, through organizing the Smart City Summit & Expo, we look forward to seeing decision makers in Taiwan’s central or municipal governments acquire smart city “know-how,” so they can mull plans or strategies that can really help them build a better city. TN: Could you talk about TSSA’s plans for the 2020 Smart City Summit & Expo?

LIN: The Smart City Summit & Expo will be held at Taipei Nangang Exhibition Center, Hall 2, next year, which will provide more space than previous years. We are planning to divide the exposition into six major themes, such as smart transportation, smart healthcare, and smart education.

There will certainly be conferences. In fact, the conferences are the primary purpose of the Smart City Summit & Expo, while the exposition is of secondary importance.

We aim to gather city leaders, experts, and industry representatives at the conferences so they can discuss and exchange ideas, ranging from smart city technology and applications, to city governance. And while they are in Taipei, we provide a venue for companies to showcase their products and services. Cities can also demonstrate how they solve various urban problems with the help of technology.

TN: In your opinion, or from the perspective of industry, what can Taiwan’s central and municipal governments do to help promote the smart city concept?

LIN: It is important for government officials to acquire practical knowledge or concepts about smart city technologies and applications. In this way, they will create sounder and more pragmatic objectives, or requests, before opening bids or making deals with enterprises. Otherwise, they will set up unreasonable or unsustainable goals that companies are unable to achieve.

Governments also need better communication with industries if they want to work with the private sector to find solutions to cities’ problems. If they have no idea about how to do something, they should talk with industry leaders, who are familiar with the real situation and possess solutions.

TN: What do you think are the rising fields for smart city initiatives in Taiwan over the next few years?

LIN: Smart transportation has been gaining a lot of attention in recent years, and is what the government is mainly focused on. In addition, I think smart security has great potential. However, if we are to really achieve “smart,” we need to collect mass data first. Artificial intelligence (AI) can only be applied in infrastructure projects to provide solutions when we have sufficient data.