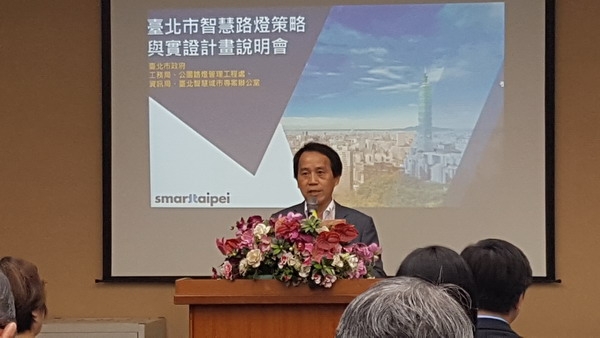 Smart Street Light Will Be Deployed Widely in Taipei

Charles Lin, Deputy Mayor of Taipei City, indicated that the smart street light will be first used for the testing stage of city’s innovative application, such as smart transport and internet of vehicles. In addition to the street light management and improvement of traffic congestion, he added, the smart street light will be a brand new living lab project open to startups to experiment and develop their innovative ideas, services, and even the business model.

The smart street light can be served as not only LED lighting, also the real-time sensors for temperature, humidity, and air quality. Furthermore, with the capability of CCTV, the pole can measure the speed of passing cars and generate analysis and advice according to its statistics of traffic flow, car speed, and traffic congestion for competent authority’s reference in formulating future policies.

The data collected from the smart street light can not only be transmitted through wires, but also through main IoT transmission technologies, such as Wi-Fi, NB-IoT, and even for the establishment of 5G base station. The standardized plug on the pole will be served for Plug and Play service and modularization. The App Interface (API) of smart street light supports Open API and Open Data, making it accessible to the public. Moreover, with the 24-hour power supply, the service can be used without concerns on electricity interruption.