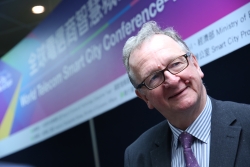 Dr Short’s five-day official visit to Taiwan proved to be a fruitful mission. During his speech, Dr Short said that he was happy to have led 22 British businesses to showcase UK expertise on cyber security technology, Internet of Things (IoT), and connected autonomous vehicles (CAV) at the “Innovation is GREAT” pavilion at the this year’s Smart City Summit and Expo as part of the smart cities mission. He also met with major companies and policy specialists.

Smart City Summit & Expo (SCSE) editors caught up with Dr Short to talk about the UK’s preparations for the future 5G reality, his insights on open data, and how Taiwan could play a key role in building and shaping thriving cities of tomorrow. The interview took place at the venue of the summit, the Taipei Nangang Exhibition Center.

The highlights from the interview with Dr Short:

SCSE: This is your first visit to Taiwan. How have you found the experience so far?

Dr Short: It’s been wonderful. I enjoyed the warm welcome and hospitality very much. I had the pleasure of meeting the Taiwan Industrial Technology Research Institute, Quanta Computer, Mediatek, Minister without Portfolio Audrey Tang, and many leaders from the industry.

SCSE: You’re leading the smart cities mission and organizing a display at the “Innovation is GREAT” pavilion for this year’s Smart City Summit and Expo. Can you tell us a bit more about that?

Since last year the standards have been agreed with 5G. The spectrum in some countries such as the UK has been released. That means that people are able to move from research to implementations. The smart cities is very important to blend in together the data, the sensors, as well as the communications.

SCSE: You mentioned access to data and release of spectrum as the key ingredients of 5G in your keynote speech this morning. Can you tell us more about that?

Dr Short: In my speech I stressed the importance of data as a key ingredient to the market. That’s because we can’t deliver 5G unless people innovate with more data. What would that mean? That would mean if you have access to data in digital health for example, you might be able to predict and prevent diseases. If we don’t have access to the data, you can’t do that. With 5G where we have high speed and high capacity, it would mean more sensors would be connected and a lot more data would be collected. Therefore, to me thinking about how you exchange data more fully is critical.

This morning I gave an example of the London Datastore where we put the city of London’s data from transport to crime rates in the Datastore. It’s a free and open data-sharing portal where anyone can access data. It’s allowed innovators and inventors to create new apps, also to create new areas of suggestions. Because they can see the data of visitors of London underground, they can do special maps for disabled people, helping people to get around in London when it’s busy and when it’s not busy. It’s been around for many years, and we’re refreshing it with more data all the time.

SCSE: What about the release of spectrum?

Dr Short: The other key ingredient that I stressed was the release of spectrum. The UK spectrum is 3.4GHz bands; we call that mid-band spectrum. In Taiwan, it’s planned to be released next year. Without spectrum or radio waves you can’t connect anybody. So the key ingredient to any telecom industry is the spectrum availability. You need to share more data to make 5G work, and you need to have enough spectrum to make the networks offer the services that they needed.

SCSE: What are some of the most pressing issues of 5G?

Dr Short: The most pressing issues were spectrum, but now I think it’s data exchange, and access to sites. Sometimes you can’t build networks quickly unless you have good access to sites. It could be roof tops, or towers. I’d like to stress that key ingredients are not just data but also spectrum and then sites. After that I think it’s the business case. It’s important to make sure the business case with 5G is really strong. That means working with other sectors such as healthcare or agriculture, and to help us to start to look at it from the demand side rather than just the technology side.

SCSE: How can Taiwan better develop its competitive edge in the global telecom industry?

Dr Short: Taiwanese industries are already very strong in electronics, especially the design. Perhaps less so in services, less so in software. However I don’t think it’s a big problem here. I think it’s one where Taiwanese companies could collaborate to develop.