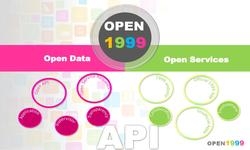 In “Open Data” aspect, the city government has been updating the information of “immediate service” online for citizens to access instantly since April 15, 2015. Meanwhile, the opening of API enabled citizens to download, analyze, and carry out other value-added application based on the macro data of service cases.

In “Open Services” aspect, which broke with the tradition of telephone-based service, allowed citizens to notify emergency cases via more convenient and instant 1999 thematic website and apps. Moreover, private sectors could develop apps according to their own demand built on the opened API.

Referring to the ideas of “Open 311” of the US, the city government established standardized forms of four APIs including “Get Service Request”, “Post Service Request” and so on for citizens to utilize.

As for the applications of open data, the city government had analyzed the cases notified and discovered the fact that illegal parking was the most frequent issue complained by the people. The data of overlapping illegal parking map with planned parking lots that indicate the supply and demand status of parking can be offered to authorities concerned as policy-making reference. Furthermore, during the severe Dengue Fever epidemic in 2015, the city government opened the location data of empty lands and houses for citizens to notify possible sources of mosquito. In 2016, the government cooperated with Taiwan Stat to visualize the 1999 statistical data online to make statistics straightforward and favor policy-making.

he city government planned 33 immediate service items divided by 9 categories and shortened the average problem-solving time from 2.9 to 1.1 days. The open data since April 15, 2015 shown on the thematic website of 1999 allowed citizens to browse the issues like city environment which people concerned the most and oversaw the efficiency of the government.>

The 1999 program provides multi-faceted communication channels. Citizens can complete case-notification on their needs and habits, and all these cases, including traditional telephone sources, will eventually be collected and passed to the case-handling platform. Besides the thematic website of 1999, the city government also provides one self-developed app and three private developed apps as the new notification channels.