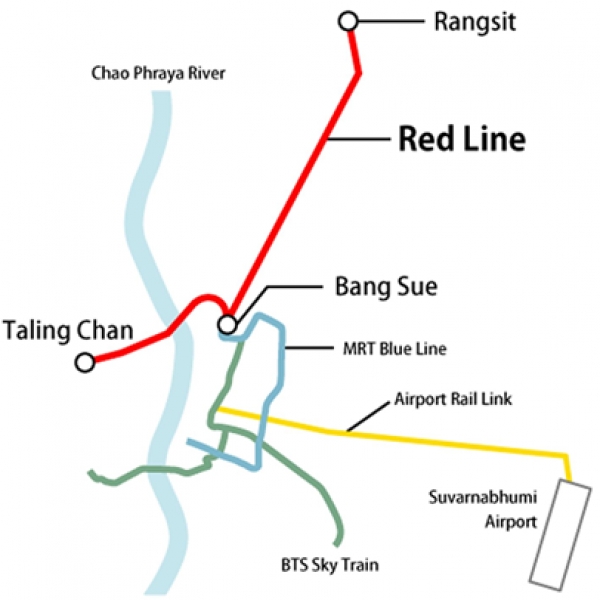 The SRT (State Railway of Thailand), which operates the railway between major cities of Thailand since 1890, is a government-owned railway company. There are approximately 4,035 km long railway under operation of SRT, in addition of around 1,160 km in is under planning or construction, and 1,595 km might be built on demand. Since part of the MRT route is under same route with that of SRT's, so the SRT is the employer, the contracting procurement unit. The communication system diagram of Red Line MRT of Thailand

Red Line MRT system of Thailand stretches from Bang Sue station (which is located in downtown of Bangkok) to Rangsit station (26.4 km in north) and to Taling Chan station (14.6 km to west). Red line will be constructed via elevated route. This project, which is the phase one, includes rail track constriction, overhead line system, power supplication system, signaling system, communication system and the design and construction of the vehicle. The amount for this project is approximately 32.399 billion Thai Baht (around 30.4 billion NTD) and is planned to be completed at 2020. Mitsubishi Heavy Industries will be in charge of system design and the procurement of E&M system (excludes the vehicle). Among this system, Glory will be subcontracted for the planning and design of MRT communication system, and the equipment purchasing and supply. The route of Red Line MRT of Thailand

Glory-Tek exportation experience of the railway communication system, it's not only bringing the chance of future development for our company but also respond to the "New South-Forward Policy" which president Tsai called for, and the "Promotion program of New South-Forward Policy" which Executive Yuan is pushing at the moment, and shows the potential benefits of "New Go-South Policy" under right commercial model.

Glory-Tek has been in cooperation with Mitsubishi Heavy Industries in Taiwan High Speed Rail Nangang Extension project since 2012. As the demand of the relevant project quality and project management requirements from Japanese company are far more serious than the Taiwanese manufacturers, so there's certain degree of differences for cultural understanding and quality requirements, which causes the difficulties such as the below:

● Cultural Differences and Estrangement: Since Japanese Company have higher demand of the project work output and quality than normal Taiwan industrials level. In the initial stage, both parties use English to communicate, due to that English isn't mother language for both parties, these frequently causes misunderstanding and misrecognition. Therefore, Glory-Tek hires the professional technology staff with Japanese speech ability to solve the communication issue.

● Integration between existed and new systems: The THSR Nangang station is the extension of current system. For the project scope, which Glory-Tek in charge includes different equipment and subsystems from Japan, Germany, Switzerland, Taiwan, etc. for this project. It's a great challenge to perform the integration between subsystems, functional verification and system switch-over in condition of not interfering daily operation of THSR. To solve these problems, Mitsubishi Heavy Industrials decided to transfer key technologies from their railway construction practical experiences of multiple countries to Glory, and this triple wins decision created best benefit for all parties: THSRC, Mitsubishi Heavy Industrials and Glory-Tek.

● Introduction of International Standard: RAMS is a global requirement for railway related engineering project for Reliability, Availability, Maintainability, and Safety. And command standard of railway construction of railway operators. When Glory-Tek performs the Taiwan High Speed Rail integration of communication systems, we introduce the RAMS related workflow and requirement through the support of Mitsubishi Heavy Industrials engineering experiences. This can benefit the engineering quality of the contracted railway communications project, and can enhance Glory-Tek's core competence of related future engineer project.

ILLUSTRATION PICTURE
Picture 1. The Glory-tek and MHI peoples who in charge Red Line MRT of Thailand Picture 2. The station pictures of Red Line MRT of Thailand