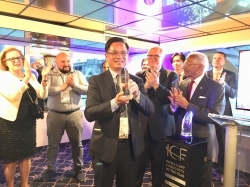 Taoyuan Won the ICF 2019 Intelligent Communities of the Year

The Top7 Intelligent Communities in 2019 include Taoyuan (Taiwan), Chicago (Illinois, the US), Hudson (Ohio, the US)Westville (Ohio, the US), City of Abbotsford (British Columbia, Canada), Sarnia-Lambton County (Ontario, Canada), and Sunshine Coast (Queensland, Australia), among which Taoyuan is the only Asian city selected.

This year, the Intelligent Community Award is held under the theme of “Infinite Learning”. The co-founder of ICF, John G. Jung, has come to Taoyuan from April 29th to 30th for a site visit tour. During the tour, he showed recognition on Taoyuan City’s continuous efforts in developing potential smart applications in the city, including promoting citizen involvement in governance and municipal finance, young innovation entrepreneurship, and digital care for new immigrants and elderly, via smart education implemented in schools.

According to Jimmy Chiou, Taoyuan Deputy Secretary General, the key to winning the honor lies in Mayor Cheng’s dedication in establishing smart education, Taoyuan Citizen Card(TCC), and startup bases, with the growing trend on developing smart city. In the future, Taoyuan expects to showcase the results of various projects on technologies, culture, and tourism to the world, enhancing the close collaborations with industry, government, and academics while sharing their experience in building an international smart city through an ICF international forum held in Taoyuan. The city will continue to promote maker’s training program and build a “creative Taoyuan” for young talents to start their own innovative businesses.